Whenever we talk about IOT, first things that come into our minds are Arduino and Raspberry Pi. Unlike raspberry pi, Arduino is a micro controller platform, you can program it so that when certain inputs come in, it will perform or make other devices perform certain actions. You can connect sensors to the arduino platform . which will have the code inside, depending on what conditions happen, it will trigger certain events.

All devices such as Tele Visions. printers, refrigerators are getting smarter by connecting them together over various networks, gather various data from around the world, process them and making them available for various services and operations.

Arduino boards are one of the way you can go about building your own IOT devices. Arduino has now released two new IOT boards – Arduino MKR WiFi 1010 and MKR NB 1500.

This is another board which was released along with MKR WiFi 1010, which employs the all new low power NB IoT (narrowband IoT) standard, which is designed to operate via cellular/LTE networks.

What is NB IOT?

Basically NB IOT is a new communication standard for mobile network that is specifically for IOT or Internet of Things. NB IOT is currently a part of the broader LTE specification was originally designed by Huawei and Ericson. The key to the tech is in the name itself.

NB IOT can support huge range of devices over just 200MHz of spectrum which attracts mobile operators who wants to operate IOT carrier services. NB IOT is designed to work with what professionals call – The Constrained Devices; such as weather stations or soil PH monitors. NB IOT can be a very efficient way to operate these kinds of devices with very low power consumption.

From end user perspective, NB IOT based devices deployment possible,in situations where it is impossible to establish dedicated unlicensed network. Any area with mobile network coverage is potential and fertile ground for IOT devices.

The NB IoT communication standard takes advantage of the current LTE networks and provides much faster data transfer than currently existing competitors such as LoRa and Sigfox. With very less battery consumption, this board can be used from anywhere with cellular connectivity for long time without replacing the battery. 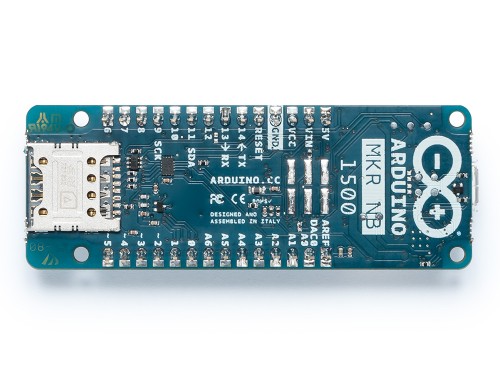 Like other Arduino boards this board have a wide set of GPIO pins – 22 I/O Digital (12 PWM), 7 Analog input and support I2C, I2S, PWM, UART, SPI etc and can be programmed online or offline using Arduino IDE.

Input voltage to this board should be 5V for stable operation. In this board, an optional LiPo battery can be connected which will be automatically switched when one fails. This board can also be powered using USB cable via USB port (5V).

Note: While other Arduino board that takes input and gives output a maximum of 5 V, this GPIO pins this board can handle a maximum of 3.3V only. The board may burn off if you provide a voltage greater than 3.3V with out using level shifting circuits.